THESE THEMS
For a full list of Film Festival screenings, please visit our Home Page.
Below are highlights from the journey of ​These Thems

The unproduced pilot version of These Thems was chosen to be one of the select projects to take part in
The Gotham's Project Market in NYC! Fingers crossed and looking forward to meetings with potential collaborators!

Endlessly proud of Vico Ortiz for being presented the HRC Visibility Award!
Watch their entire speech on YouTube. Congrats Vico!

These Thems has entered an exclusive shopping agreement with Paradigm Agency for a half-hour comedy series,
​ inspired by our webseries! For the next six months, the webseries will be unavailable to the public
​ as we package the concept and aim for a bigger, brighter future for the show.

Industry inquires can be directed to our Paradigm team - contacts here

If you are a fan of These Thems, THANK YOU!
Please be patient while we take the series offline and trust that we'll be bringing you lots of queer joy in the near future.
Our fans are the reason we've been able to continue this exciting momentum into this next chapter.
The entire These Thems team is so very grateful for your support in helping our dreams come true.
Stay updated on our IG, TikTok, or Twitter - @these_thems
​

These Thems director, Jett Garrison, joins the writer's room for CW's The 4400. He is the head writer for Episode 4, "Harlem's Renaissance Man."
TL Thompson ("T.I." in These Thems) plays series regular Dr. Andre in The 4400.

These Thems joins the OpenTV family!
OTV is a Chicago-based streaming platform for intersectional content.
Get three months FREE with code "DEEPFOCUS" and binge These Thems at our new home now!

These Thems is an official selection for Catalyst Content Festival, held in Duluth Minnesota!
Catalyst is one of the most prestigious series-focused festivals in the world.

These Thems co-star, Vico Ortiz, has been cast as a series regular in upcoming HBO Max comedy, Our Flag Means Death​!

IMDB hosts a panel where These Thems creatives join the Disclosure Documentary team (Laverne Cox, director Sam Feder, & producer Amy Schoeder)
and the Jinkx & De La Holday Special team (Ben De La Creme & producer Gus Lanza)
for a discussion on being Emmy eligible and what a nomination would mean for our community.
Watch on Outfest Now. 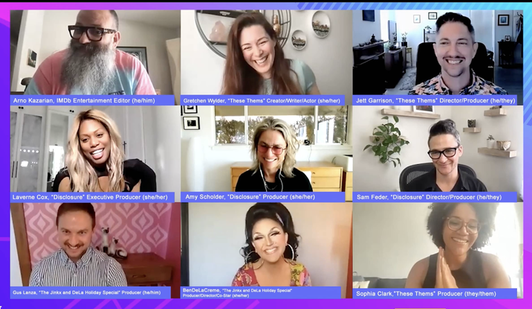 These Thems has been invited to be a part of Clexacon, the world's largest LGBTQ+ fandom convention!
Creator/writer/actor Gretchen Wylder and lead actor Vico Ortiz join panel discussions all weekend.
Learn more and book your tickets at Clexacon.com.

Three of our cast members, including lead actor Vico Ortiz, were featured in the New York Times!
"Drag Kings are Ready to Rule" shines a spotlight on our talented cast members Vico Ortiz, Murray Hill, and Wang Newton - Read the article HERE

Another great article, this time from Australian media site, Junkee:
"These Thems is a Wholesomely Raucous Ode to Discovering your Queerness as an Adult" - Read the article HERE

These Thems is playing in Cinemas down under! Anyone in Australia can view Season 1 in a real life movie theatre (remember those?!) as part of Sydney's Mardi Gras Film Festival.
The series is available for online viewing in Australia for the next two weeks through the festival's online portal.

The Guardian included These Thems in an awesome write-up, alongside
Pose, Work in Progress, RuPaul's Drag Race, and other LGBTQ+ television staples! Read the article HERE

These Thems becomes an official launch partner with Outfest Now, a new streaming platform curated by Outfest,
one of the most prestigious LGBTQ+ film festivals in the world. After over 700,000 series views on YouTube despite censorship
​and demonetization, the These Thems team is thrilled to be exclusively streaming all episodes on a platform where all proceeds
​go directly back to the community it serves. Please support the show and support Outfest Now, for only $5.99/month.
We encourage fans to look at this as a monthly donation to an organization that supports and funds queer filmmakers,
​ all while getting access to the best queer content in the world.
www.OutfestNow.com/thesethems

Borough of Manhattan Community College teaches trans and non binary awareness session for
students and teachers while screening episodes of These Thems for reference.

These Thems: Episode 1 wins the AT&T Audience Award for Best Short at Frameline Film Festival!
Frameline is the world's longest running LGBTQ+ film festival.
Our episode was in competition with 47 total shorts and won audience favorite of the entire festival -- wow!!!

These Thems is invited to screen at Geena Davis' Bentonville Film Festival.
We are given a special full season encore screening on Aug. 16.

These Thems screens at Clexacon, the largest lesbian, trans, and non binary fandom convention in the world.

Despite the censorship and push-back from YouTube,
These Thems hits the 500,000 views mark, with thousands of "likes" and comments to boot!

The Los Angeles LGBT Center invites These Thems to give a special virtual screening as part of their digital COVID response.

These Thems was demonetized, censored, flagged as pornography, and content was removed from YouTube.
After this date, all views are inherently organic, as the show stopped being recommended to viewers on YouTube.
This is part of an ongoing dispute with YouTube, a platform that suppresses and demonetizes trans-specific queer content.

These Thems premiered Episode 1 on YouTube, garnering 30,000 views in the first week.
Press that followed the release includes articles from ​The Advocate, Curve Magazine, and the Washington Blade.
All press can be found on our PRESS PAGE.

Director Jett Garrison and creator Gretchen Wylder were invited to speak at the University of Texas at Austin.

In coordination with aGLIFF, the Alamo Drafthouse in Austin, Texas invited These Thems to come back for a full season screening, which ended up selling out.

These Thems was invited to do a special screening as part of the National LGBTQ Task Force's annual Creating Change Conference. In it's 34th year, These Thems became the first narrative series to be featured at this important conference for
LGBTQ+ activists and educators. We were given a special encore screening on Jan. 18.

These Thems was invited to screen at Downtown Independent movie theatre in Los Angeles to a sold-out house!

Full season screening of These Thems at Out on Film, Atlanta's LGBTQ+ film festival

World Premiere of the full season of These Thems at North Carolina Gay & Lesbian Film Festival (now known as OutSouth).
These Thems won both the Jury Award for Best Series and the Audience Award for Best Comedy Film.

U.S. Premiere, featuring Episodes 1-3 at Outfest LA, the largest LGBTQ+ film festival in Los Angeles.
The screening was part of legendary Girl's Night and played at the historic TCL Chinese Grohman Theatre in Downtown LA.
Screening alongside Rain Valdez's Razor Tongue, the event was one of the first to sell-out online.

World Premiere of Episode 1 at Inside Out Toronto, Canada's largest LGBTQ+ film festival

Our final table read with entire cast and creative team present before locking down the shooting script.

After more rewrites, our next public table reading was held in NYC.
The number of guests doubled as buzz began to grow.

The first public table read-thru of These Thems happened to coincide with Trans Day of Visibility.
Held in NYC, friends and queer folks from across the gender/sexuality spectrums were invited to listen and give feedback.

A successful crowdfunding campaign began via IndieGoGo.
With just a concept video and a lot of social media help, the project was able to exceed its goal of raising $30,000 for production.

These Thems receives a coveted high rating of 8 on the Blklist, an industry go-to for script recommendations.
Creator Gretchen Wylder starts putting the work in to fully fund the project and to produce it on an indie level.
Casting and creative team hunting begins.

The day after Trump's election, creator/writer Gretchen Wylder decided to channel her energy into creating art that would help her beloved queer community.
​Utilizing her skills as a writer and actor. Gretchen began writing These Thems.
Powered by